Bike Kitchen is a community workshop for repairing bicycles. It offers a workshop space, tools, materials and experts to help citizens fix their own bikes. The aim of Community Bike Kitchen is not only to teach people the knowledge and skills for bike maintenance but most of all to promote cycling as a form of transport all around the world. It encourages citizens to rethink their daily commute, and take agency and responsibility in their chosen mode of everyday travel. Not only does it function as a repair workshop, the Bike Kitchen also offers activities ranging from bike riders to dinners and concerts, and as such it is just as much a hub for community-building.
Acitivism community activation Cycling DIY food Recycling Sustainability kitchen containers
Context Album Steps Contact

The idea for this tool originated with the first Critical Mass bike rides in Bratislava in 2010, as part of the global cycling movement organizing protest rides all around the world. By establishing an NGO to unite people and organizations aimed at making cycling more popular among the wider public, and after half a year of meeting, planning and organizing, this DIY project was born. By now, the Community Bike Kitchen in Bratislava has moved three times, finally landing on a strip of land on the riverbank, fittingly located on the Eurovelo bike route between the Atlantic and the Black Sea. New generations of Bike Kitchens continue to be established in different cities and countries.

Volunteers are the cornerstone of your Bike Kitchen. Get together a core team of active cycling enthusiasts; a number of three volunteers is the bare minimum to get started. Over time, “lure” people in by talking to them in the workshop, engaging them during events or launching special offers. One action that has proven to be particularly successful: Repair two bikes, get the third one for free! Fixing a bicycle is quite a time-consuming task, forcing people to come into the Bike Kitchen regularly. After having spent some time there, surely they will only want to come back!

A Bike Kitchen usually starts off as a small project just for friends; this is crucial to building a community of core members. The workshop could be anywhere; in a garage, a squatted building or strip of land, or even a flat on the second floor of an apartment building (with open-minded neighbours). Once your Bike Kitchen becomes more established and well-known in the neighbourhood, it is important to set up regular opening hours, so that the community not only knows where but also when they can find you.

What is the most important thing you need for a Bike Kitchen? Of course, a toolbox! Start with the most basic tools that are suitable for older bikes, don’t specialize in newer models just yet. The first tool you will need is a wrench no. 15 to take the wheels down. Then take it from there. Check what you have lying around at home, ask the community for donations, search scrap yards, ask for used tools in bike shops, or buy some cheap appliances online. After a while, you could also approach manufacturers to sponsor your community non-profit project with a better price for their products.

Official / Legal GET A GOVERNMENT OFFICIAL ON YOUR SIDE

Whether or not you need certain permits to set up your Community Bike Kitchen is highly context-dependent. Make sure to find out what legal steps you need to take in your city. Squatting an empty building or piece of land is of course an option but in the end you will need a longer-term, more sustainable solution in order to take your workshop to the next level. Sometimes it is possible to use municipal property that is lying empty for the time being, until the city decides what they will do with it. In that case, it is extremely helpful to get a government official on your side, who is rooting for you. This might just get you a permanent allowance to use the space…

Funding IT DOESN’T TAKE MUCH

Essentially, a Community Bike Kitchen does not cost much to set up. The majority of it can be funded through voluntary donations; in money but most of all in materials. You could also look for subsidies that can finance larger investments for the workshop that are hard to make with just donations. Be creative and combine this with a specific project or community goal in order to appeal to potential sponsors.

Production FROM WORKSHOP TO COMMUNITY HUB

Community Bike Kitchen is not just about repairing bikes. To establish a stronger connection with the local community, organize a range of activities where citizens get to know you and each other. These could be cycling-related events, such as bike tours and seminars, but also screenings, concerts, fire shows, dinners and picnics. Make your space even more accessible by offering community gardening or an open grill during opening hours. 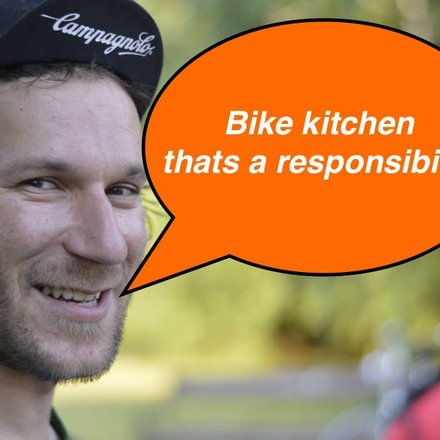