Lublin – Imagine you visit a foreign city, where you have a friend to guide you around. You experience the city through their eyes and as such you are able to get to know them better. Stroller enables citizens to get to know the city from intimate, subjective perspectives, even if they do not know anyone there at all. Local inhabitants guide visitors and neighbours to explore hidden corners, private spaces and buildings with limited access. As such, they get to experience companies and institutions from their back doors, entering zones that are usually not open for regular tourists.
active inhabitants alternative city architectural heritage city tour urban explorer Lublin
Context Album Steps Contact

Tours visiting Lublin are still mostly concentrated in the historical city center. Contemporary livability of the town is, however, reflected rather in the residential areas, which are situated in the districts built in the 1970s. Despite the well-developed infrastructure serving the everyday needs of these districts, citizens still associate cultural activities with the city center. With the first Stroller project we aimed to activate the capacity of the local neighbourhoods, where actual inhabitants could perform the role of guide and entrepreneur of their very immediate environment. Our objective was to uncover the hidden potentials of Lublin’s residential districts, their inhabitants, activists and designers. We started offering thematic walks in the Kalinowszczyzna district in the north-east of the city. The idea then spread around the entire city. This resulted in the development of alternative city touring, guided by citizens themselves as well as specialized experts.

Mobilization Searching for people and stories

It is possible to invite specific people to the project or make an open call. We make a meeting with potential guides to discuss their ideas.

We try to shape the stories into guided walks during workshop sessions. We come from individual competences and interests of the guides, work on mapping crutial tour-poins, tracing tracs and storytelling. Then we conduct working walks.

We make a “working walk”, it means that we go on tour with the guide who tells us the story, we stop at major points and we count the time. We take pictures that we use for promotion and a “guide book”. Ask additional questions and clarify confusing matters.

Together we prepare maps first on Google maps either existing simplified drawings, we mark major points of the tours, we create the general description, prepare a bio of the guides, create special leaflets for each walk. We prepare the materials for promotion, we translate into foreign languages.

We create communication platform; sub -web page or application that delivers overall information about all set of tours, accessible within our offer. We also put additional information/ specification of the walks; if there would be I-pads or mobiles required, if there will be audio material, accessible on the headphones, if participants should be prepared to change clothes, whether the walks are suitable for people on wheelchairs, if we can encourage participants to take their kids, pets, or bikes either skateboards.

The tours are ready for participants! 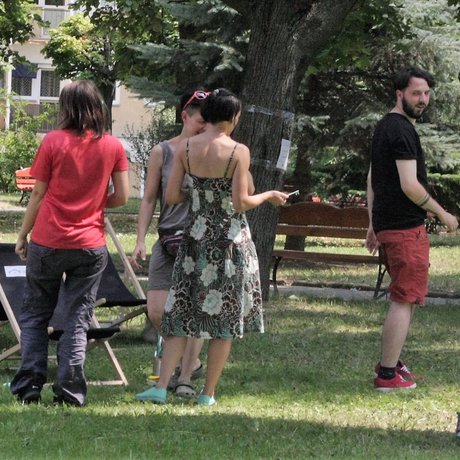 LSM estates continously provokes discussions between architects and art historians. Some of them seem to forget that the housing estate is not just an architecture or an urban plan. The dozen of interesting forms of blocks are inhabited by several thousands of (no less interesting!) people. In our opinion, residents are the true practitioners of the Open Form theory in housing, and our task is to strengthen their perspectives.